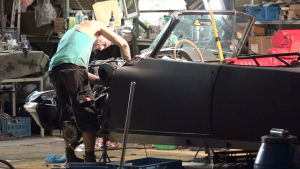 Editing ‘The DS King’
Editcompany took care of the editing and technical realization of the documentary “The DS King” for Oldenstein films. After forty years, the building of the iconic DS garage in Amsterdam has been sold. It is a hell of a job to pack all the car parts stored over the years for the move. But it is even more difficult to tell car enthusiasts and regular customers of the garage that they will lose their ‘hangout’. They came by for advice and assistance, for parts that are no longer available, or a cup of coffee and a good conversation about their pet car with garage owner David Kostelijk or his helpers. These men with hands that are always black with oil, do not keep it dry when they see that parting is inevitable. A film about men who take care of their cars and each other.‘2Doc: The DS Keyzer’ can be seen on Monday 19 September at 22.30 hrs at BNNVARA on NPO 2 and afterwards on NPO Gemist.Producer: Wieger Wielinga / Oldenstein films
Directing & camera: Doret van der Sloot
Editing: Maarten Butter
Technical realization: Editcompany VOF
Audio sweetening: Franck Veerhuis / Studio Veerhuis
Awards won: New York International Film Awards, Houston International Film Awards, Los Angeles Film Festival Awards, London Independent Film Festival Awards and Milan Gold Awards.
We use cookies on our website to give you the most relevant experience by remembering your preferences and repeat visits. By clicking “Accept All”, you consent to the use of ALL the cookies. However, you may visit "Cookie Settings" to provide a controlled consent.
Cookie SettingsAccept All
Manage consent

This website uses cookies to improve your experience while you navigate through the website. Out of these, the cookies that are categorized as necessary are stored on your browser as they are essential for the working of basic functionalities of the website. We also use third-party cookies that help us analyze and understand how you use this website. These cookies will be stored in your browser only with your consent. You also have the option to opt-out of these cookies. But opting out of some of these cookies may affect your browsing experience.
SAVE & ACCEPT